In memory of Ray Bradbury who passed away this week, I read his short story “The April Witch” this weekend. 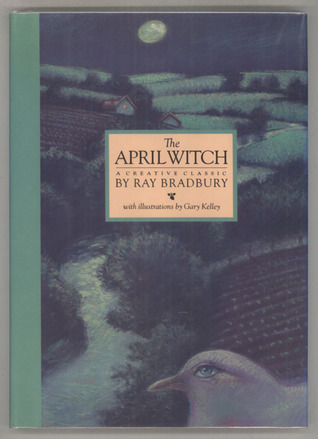 Cecy Elliot, the “witch”, belongs to a family of beings with magical powers.  She can become a leaf or a bird or a cloud or almost anything she wants.  Her parents warn her, though, that she cannot marry a human or she will lose her powers.  In spite of her parents’ warning, she wants to fall in love.

She goes into the “head” of Ann Leary, a nineteen year-old girl, with the hopes of making her fall in love with Tom, a 22 year-old man.  Unknown to Cecy, Ann and Tom had already had a relationship that didn’t quite work out.  Cecy gets Ann to say things to Tom that Ann doesn’t really feel, much to Tom’s confusion.  While Ann doesn’t realize Cecy is in her head, she does wonder why she’s saying these things to Tom.  Ann fights back and ultimately wins.

As usual, Bradbury’s writing is beautiful and the story plays out like a fairy tale.  The setting is Illinois and the time period is sometime prior to the invention of the automobile  when horse-drawn carriages are still used for travel.  While I might have felt a little sorry for Cecy in her failure, I had to admit I was rooting for Ann the whole time.

3 thoughts on “The April Witch by Ray Bradbury”